The British Library, with funding from the Indigo Trust, has recently conserved, catalogued, digitised and made freely available online a further 1,100 images of maps and associated documents relating to East Africa.  The material represents part of the War Office (now Ministry of Defence) Archive of cartographic and topographic material produced in the late-eighteenth and early-nineteenth centuries to support British interests overseas.

The following post was produced by the British Library and is reposted here with their kind permission. 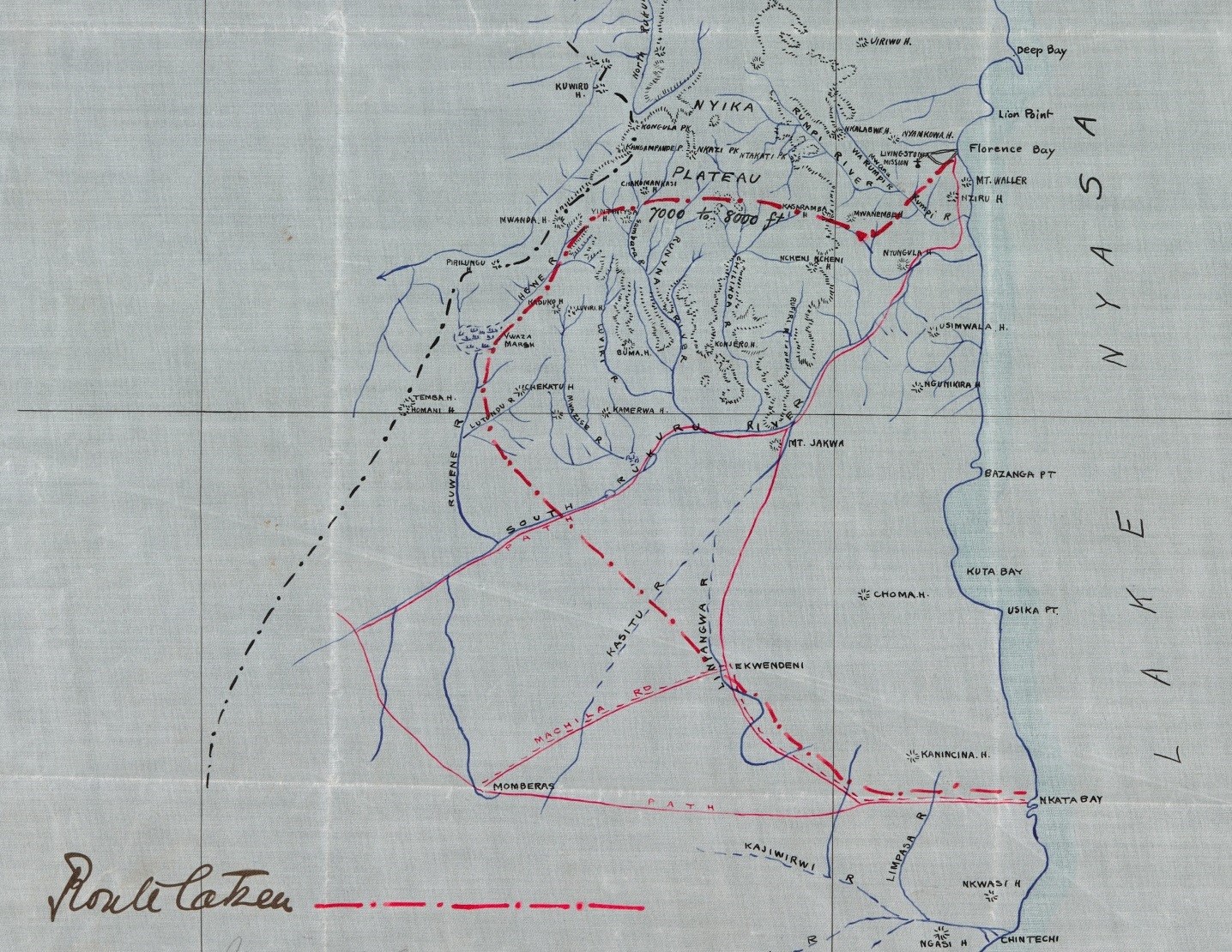 Figure 1 is typical of such mapping.  A carefully prepared manuscript in coloured ink and watercolour on tracing linen, it also represented an interesting challenge for the Library’s cataloguers.  Despite the lack of title, Lake Nyasa quickly establishes the location as north-eastern Malawi (or British Central Africa Protectorate as it was in 1904, the date revealed by a marginal note).  But to understand the map fully, and you certainly need to do that to catalogue it, it is also necessary to determine why it was produced.  Frustratingly, this attractive little map offers few clues.  The Nyika Plateau, a large area of rolling rough grassland, is portrayed in some detail together with an expedition route.  The distances involved are large – the entire march would have been over 250 kilometres, some of it at altitudes of 2,000 metres.  Was it perhaps an exploratory trek into an area hitherto unknown to ascertain the potential for British colonial control?  It is here that the research must start, and an article in a forty-year-old journal (Boeder, 1979) provided the answer. 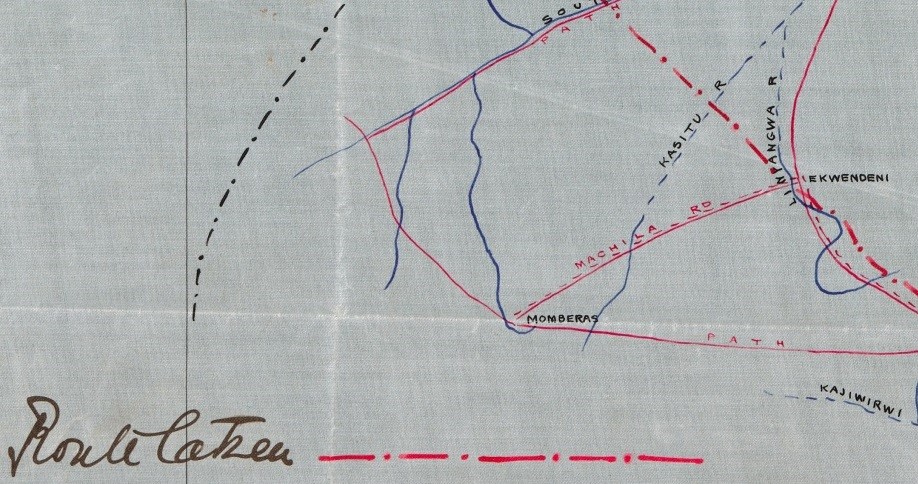 Figure 2. Enlargement of Figure 1, showing the village of Ekwendeni, the seat of the indaba between Alfred Sharpe’s administration and the Ngoni tribal chiefs. (Extract from WOMAT/AFR/BCA/23/1)

Figure 2 is an enlargement of the southern portion of the map, and in particular the seemingly anonymous village of Ekwendeni.  It was here in September 1904 that Protectorate Commissioner Alfred Sharpe (1853-1935) signed a major administration agreement with the leaders of the powerful Ngoni tribe.  The Ngoni had settled the plateau and its surrounding area in the 1850s and soon assumed control over the local Tumbuka and Tonga tribes.

Sharpe was a character of boundless energy.  Born in Lancaster and educated at Haileybury College, he embarked on a career in law, training with a firm of solicitors and being admitted to the bar at the age of twenty-three.  But Sharpe was soon restless.  In 1883, in a joint undertaking with a cousin, he established a sugar plantation in Fiji, but a beet sugar crisis the following year put paid to the endeavour.  Sharpe’s next venture was to central Africa where he would spend much of the rest of his life.

Initially engaged as a professional elephant hunter and ivory trader, Sharpe met Harry Johnston, Protectorate Consul-General and later Commissioner.  Johnston, recognising the usefulness of Sharpe’s legal training, quickly employed him to make treaties with tribal chiefs.  Sharpe soon established himself as a talented diplomat, and was appointed as Johnston’s deputy in 1893.  Three years later Johnston, by now Sir Harry, vacated the post with Sharpe eventually succeeding him as Commissioner.

Part of Sharpe’s remit was to continue Johnston’s establishment of administrative control within the Protectorate.  This included the imposition of Hut Tax, an unpopular household levy that became even more so in a polygamous society where each wife had her own hut that attracted an additional charge.  Sharpe trod carefully, purposely deferring until 1904 when the Ngoni were at their most vulnerable.  The death of Chief M’mbelwa had created a power vacuum, order was deteriorating and a local famine had triggered overgrazing, out-migration and tensions with neighbouring tribes. In late August Sharpe’s party took a steamer from Fort Johnston (now Mangochi) up the west coast of Lake Nyasa to Florence Bay.  From here they climbed 800 metres to the Livingstonia Mission on the edge of the Nyika Plateau.  An indaba (gathering) was arranged with the Ngoni at Ekwendeni, to which Sharpe and his party walked the 160 kilometres across the plateau.

Thousands of Ngoni had gathered at Ekwendeni, and although Sharpe had brought soldiers it was his intention not to use them; indeed, they wandered unarmed among the thankfully peaceful crowds.  Sharpe met the Ngoni chiefs on 2 September, with a mission teacher acting as interpreter.  Sharpe explained that the tribe’s expansion into neighbouring lands had contravened an earlier pact with Johnston, the agreed penalty of which was subjugation to colonial control.  The chiefs conceded this, and so negotiations began on the terms of the administration. While Hut Tax would have to be paid, the Ngoni still drove a hard bargain, with Sharpe agreeing that the tribal constitution could remain, the local police could be staffed by Ngoni tribesmen and that taxation could be deferred until 1906.  The chiefs would assist in the collection of the taxes in return for stipends of up to £30 (about £2,500 today).  The deal was signed, sealed and delivered by sunset.

That the agreement was signed so quickly may have been down to both side’s preparedness to negotiate.  Johnston had been a tougher type than Sharpe, frequently resorting to military force and offering little by the way of indigenous self-governance, and understandably affairs had often been strained.

Sharpe, by now Sir Alfred and Governor of the newly-created Nyasaland, retired in 1910 yet the relatively good relationship between the administration and the local population continued.  By 1914, however, life for the Ngoni had become more difficult.  Overgrazing and poor soils had once again led to famine and out-migration, and in turn the Hut Tax became unaffordable for many.  Ngoni chiefs clashed with new governor Sir George Smith over a refusal to reduce taxes for the most disadvantaged.  Relations reached a low point with the onset of the First World War and calls for tribal enlistment and the requisition of food from areas already suffering shortages.  Smith tightened his control, and the powers of the tribal chiefs diminished.

While this is a fascinating story, it is nevertheless one that the map alone cannot tell.  The map itself is neatly compiled – certainly the hand of a trained draughtsman, probably a non-commissioned army officer or mid-ranking government official.  However, there is also a second, larger and more cursive script demarking the expedition route (Figure 2).  Somewhat blithe alongside the draughtsman’s more painstaking work, this addition in generously laden, broad-nibbed fountain pen is very much the hallmark of a senior officer.  It was a long shot but worth a punt, and ten minutes and an internet search later a collection of Sharpe’s personal correspondence was unearthed.  The handwriting appeared identical but, as tempting as it is, cataloguers must work in certainties, and the creation of a Library record for Sharpe as ‘cartographer’ will have to wait for another time.

The Ekwendeni map is typical of many in the War Office Archive, portraying the challenges encountered by indigenous populations in the face of colonialism.  The archive can be accessed from the Library’s War Office Archive webpage or downloaded from Wikimedia Commons; there is also a Google Map index marking the central point of each map sheet and providing links to the catalogue records and images.