Back in October 2014, I blogged about our new system to track proposals and the insights it revealed into our grant-making habits. Six months on and with around a year’s worth of data, what’s changed?

Well, the volume of proposals received has remained fairly constant during that time. Over the course of the last year or so, we have received some 232 proposals seeking a combined sum of just over £5m. Of those, we have awarded grants worth £425,205 to 29 organisations (a strike rate of 12.5% – unchanged from six months ago). As yet, these figures don’t distinguish between proposals we have actively solicited and those that have come out of the blue. What we can say is that around two thirds of grants awarded have been for organisations we hadn’t previously supported with the remainder going to organisations we had funded at least once before.

As regards the amount of money a typical applicant seeks, the last year has seen proposals ranging from £716 to one that topped out at £339,696. This gives a mean average of £26,895, although a median of £13,397 is probably a more accurate reflection of a typical proposal. This is reassuring as it is an indication of the fact that most applicants take the time to read our site and guidelines regarding typical grant size.

Among the proposals we received some countries are significantly overrepresented. This is to be expected – larger countries and countries with a more vibrant tech or civil society scene are likely to appear more often in our list of applicants than others. With 37 proposals received, South Africa leads the way. Uganda, though, is not far behind with 34 proposals and Kenya and Cameroon taking up third and fourth spots respectively. Together, these four countries account for more than half the total proposals we have received in the last year. Nigeria, Ghana and Zimbabwe, meanwhile, accounted for almost another 25%, meaning that 75% of all the proposals we received came from organisations in just seven different countries. In total, we received applications from 28 different African countries, plus a few others from organisations registered in the US or UK. 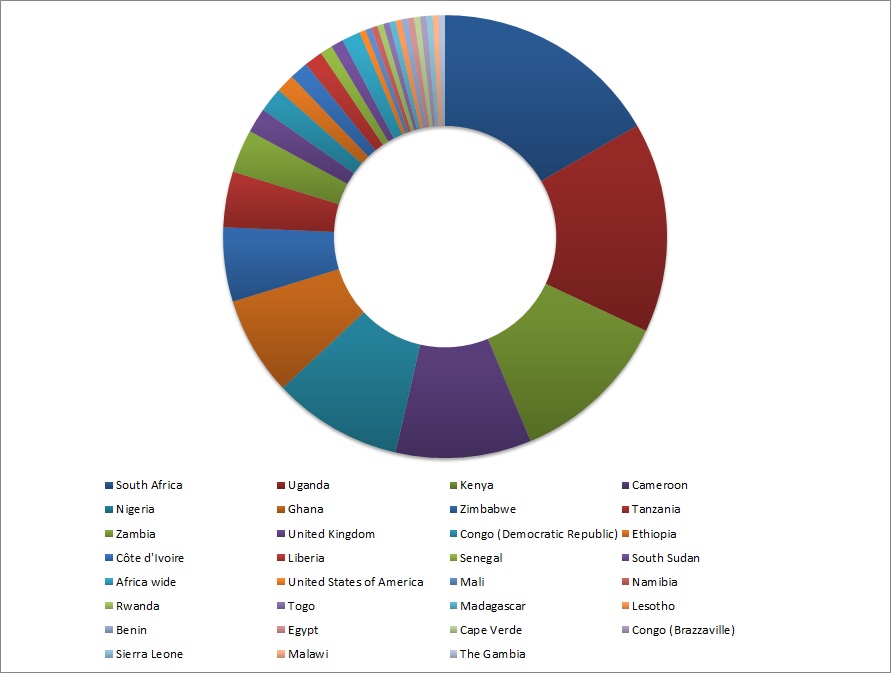 In future, we hope to be able to use our system to continue tracking where proposals are coming from and how many are getting through to approval. As part of our data management strategy we may well see added functionality in the form of distinguishing between solicited and unsolicited proposals and we hope to start tracking the proposal category, e.g. health or education.