Android, Health and Togo – An Update

The following post was kindly prepared by Hope Through Health

Hope Through Health (HTH) is excited to share this update on our CommCare project.  Thanks to a partnership with Dimagi and generous funding from the Indigo Trust, HTH launched a new mHealth initiative using CommCare in the fall of 2013. In September, Dimagi Representative Kara Grijalva visited our site and spent one week working with HTH Program Director, Andrew Lopez, providing training on how to design and build applications within CommCare.

In late December and January, six members of our partner, GlobeMed at MIT, visited Togo and contributed significantly to this mHealth project.

Upon arrival to Togo, the MIT team got right to work on CommCare, a mobile health application to be used by our Community Health Workers (CHWs) to streamline data collection and management.  CommCare requires that several forms be built depending on the type of patient being visited.  Instead of simply building and field-testing one form, as was their goal, the MIT students were able to build multiple forms during their short stay and field test three of them.

To inform this work, the MIT students met with HTH staff members and CHWs to understand the unmet needs of the current paper-based system used by the CHW Program.  First, students met with Marie, the CHW Program Director.  Her main concern was that she had to manually input data from the standardized paper forms at the end of each week, which was time consuming and inefficient.  Marie wanted the data to be able to go directly from the CHW phones to an online database, which she could then access to inform programmatic activities.  Emmanuel, director of Monitoring, Evaluation and Quality, expressed frustration that he could not analyze the data until Marie inputs it into the system, noting the time delay of data sharing.

Then of course, the MIT students met with CHWs, the people that will be directly using the CommCare application on their cell phones.  Unlike Marie or Emmanuel, the CHWs were skeptical to embrace the new technology.  CHWs were concerned about bringing a new piece of technology into a patient’s home, which could potentially generate suspicion and expose the patient’s HIV status to neighbors.  There was also fear of being viewed as arrogant for bringing sophisticated technology into poor homes.  Additionally, the CHWs expressed concern at having to learn how to effectively use CommCare.

However, when the CHW Program Director and 9 CHWs received hour-long one-on-one training sessions, they found the touch screen user interface to be extremely intuitive.  Each CHW was able to begin to learn how to use CommCare in the one-hour session.  After this training, the 9 CHWs began to practice using CommCare on one module. 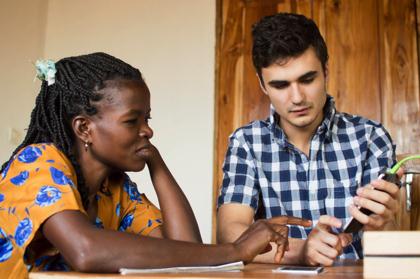 MIT student Guillaume teaches a CHW how to use CommCare

An MIT student shadowed each CHW using the CommCare application at least twice.  Both the MIT student and the CHWs had recommendations for revisions.  These revisions, of which there were 9 rounds (one per CHW), were incorporated into the CommCare forms.  Another change was a switch in the chosen technology.  Preliminary research and on-site testing by one MIT student found that Android phones are a better fit for CommCare than the Nokia phones HTH had originally planned to use; thus the Nokia phones were sold and Androids were purchased at a comparable cost.

In spite of the incredible progress made by HTH staff, including CHWs, thanks to the support and hard work of our MIT student partners, CommCare has yet to be rolled out.  Additional rounds of field-testing remain to be completed for all of the required modules.  There are also technical challenges to be resolved in order to streamline the data analysis process for HTH’s CHW Supervisor and MEQ Director. Thus, paper forms have not yet been entirely eliminated from the CHW Program.  Work on this project is continuing in Togo, specifically additional training activities.  MIT students are planning to return to Togo this summer to conduct further field testing once the program has been rolled out. Despite the unanticipated delays in the launch of this initiative, CommCare is still an exciting development for HTH.  We hope that this initiative will ultimately improve the quality of care we provide, both in the clinic and in the home, to all of our patients.  Stay tuned for more updates!