Roads in Uganda – An Update from WOUGNET

Although large parts of Uganda have witnessed a long dry spell in recent months, some of the country’s roads have recently been flooded, including in Oyam district where Indigo grantee, WOUGNET, have been busy training local Voluntary Social Accountability Committees (VSAC). The photographs below give some impression of the state of the roads in this area. On the left, residents look on as the vehicle carrying the District Chairman, Hon. Charles Okello Engola macOdogo, attempts to cross over to the other side of the road. On the right, meanwhile, residents struggle to remove the culverts that were dumped in the middle of the road by a contractor charged with maintaining the road. The road is an important lifeline, connecting the community to lela market and also leads to Amido primary school. Residents say that this road has been like this for a period of six months now. 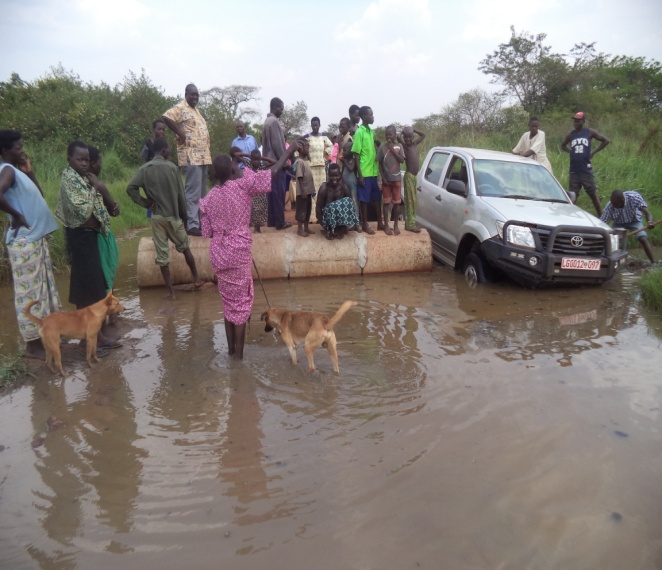 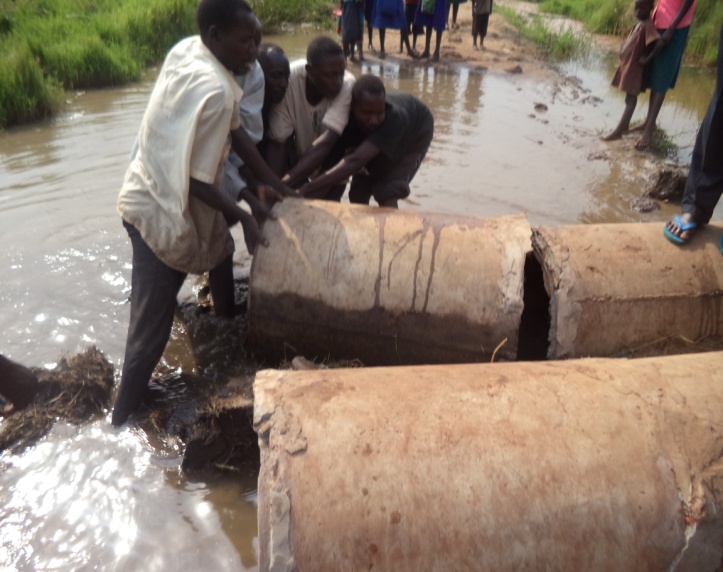 Having been empowered by Women of Uganda Network to monitor, document and report service delivery issues in the community, VSACs are often regarded as “saviours” by community members. This issue was therefore brought to the attention of one VSAC member in August 2013 who then took the initiative to visit the site to take a look for herself. The local VSAC tried to investigate and find out the responsible contractor, but without much luck. They then decided to report the matter to the sub-county chief, but again nothing was done. As more and more community members began to complain, the VSAC decided to visit the office of the District Chairman and report the matter to him directly.

The District Chairman promised the VSAC that he would visit the site to assess the situation. On 5th February 2014, together with the Resident District Commissioner, the District Chairman visited the road leading to Lela market and Amido primary school to see the problem at first hand. He then ordered some further works to be done.

The flooded road has greatly affected activities in the district. For example, vehicles carrying sellers and their commodities and some buyers from neighbouring towns and districts found it difficult to pass. Education was equally affected, as pupils were forced to wade through the cold to get to and from school. Some pupils therefore resorted to dodging morning lessons as noted by Mr. Bua Laurence, a VSAC from Acan Pii parish.

As a result of pressure from the VSAC, the contractor finally relented and completed the road works within a month. In a follow-up visit, the local VSAC found that the works had indeed been completed and the road is now accessible to pedestrians, cyclists and vehicles.