Crowdsourcing with CIPESA: An Update

Much of the following post is taken directly from an end-of-grant report submitted to us by CIPESA. Appendices and personal details have been removed.

In June 2013, The Indigo Trust supported the Collaboration on International ICT Policy in East and Southern Africa (CIPESA) with a grant of £12,000 towards documenting and monitoring health services delivery under the Peace, Recovery and Development Programme (PRDP), the government-run initiative for post-conflict recovery in northern Uganda. The project focused on developing a platform for the media and the community in northern Uganda to use ICTs to monitor health services delivery, mainly in the districts of Amuru, Gulu and Pader in the Acholi sub-region.

The two decades’ war in northern Uganda perpetuated by the Lord’s Resistance Army (LRA) at its peak displaced two million people and severely devastated the region. With social infrastructure badly damaged, and in many areas as much as 90 per cent of the population displaced, the region was largely isolated and is today struggling with post-conflict recovery. Whereas large amounts of resources are going into post-conflict recovery and development, in areas such as Acholi which were the epicentre of the conflict, service standards are dismally low, and citizens hardly participate in monitoring service delivery, or in other arenas of governance. 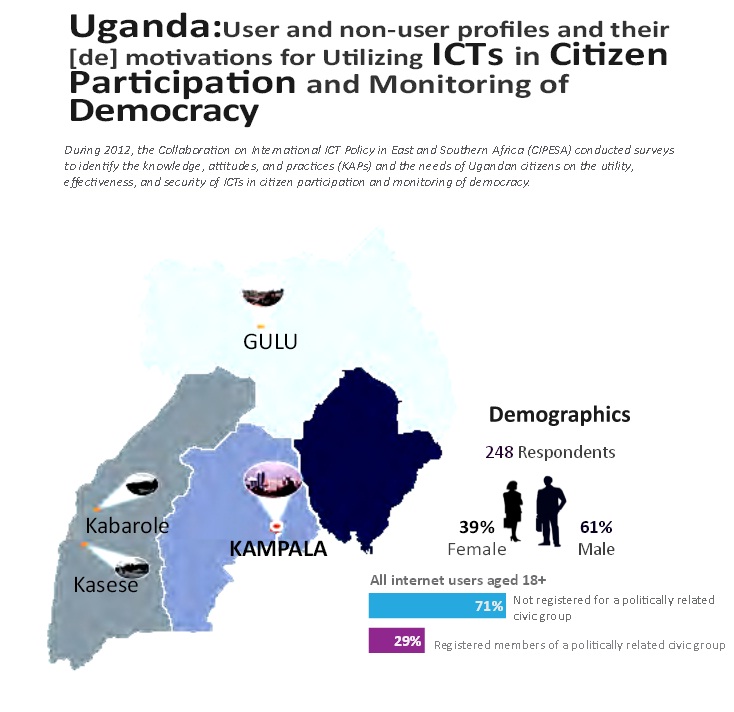 The project supported by The Indigo Trust was implemented in partnership with the Northern Uganda Media Club (NUMEC), a Gulu (Northern Uganda) based media development organisation, as a component of a pre-existing collaboration between the two organisations under the iParticipate Uganda project supported by the Swedish Programme for ICT in Developing Regions (Spider). iParticipate Uganda aims at catalyzing civic participation and democracy monitoring through ICT. One of the objectives of iParticipate Uganda is to train the media in using ICT as a catalyst for civic agency and participation in the northern region.

CIPESA also held a “Think Event” targeted at 15 participants at NUMEC. The aim of this event was to introduce NUMEC members to the project and map priority sectors and ICT tools that citizens could use. At the end of the event, it was agreed that the use of ICT in northern Uganda should prioritise two objectives: 1) promote accountability; 2) Encourage citizens to demand for better services.

Subsequently, we started collecting the initial information on health interventions under PRDP to populate the site and form the basis for the service delivery monitoring.

Next was the re‐design process of the CIPESA website to integrate the Ushahidi platform. In order to making reporting and follow ups easy, five categories were selected i.e. Health Service Delivery, Water and Sanitation, Community Action, Health Centre Governance, and Health infrastructure. The information collected was then fed into the developed crowd‐sourced platform and shared with media in northern Uganda. Hundreds of official and mainstream news feeds were integrated into the portal.

We experienced challenges in obtaining public information under the PRDP programme from government agencies. Probably as a result of improprieties that was subsisting in the programme, which resulted in parliamentary investigations into the misuse of PRDP funds and the ultimate suspension of donor aid to the programme. Nonetheless, we commenced a mentoring programme for journalists in the region, particularly the districts of Gulu, Amuru, Pader and Kitgum, to use crowdsourcing and other social media and ICTs to report on health services delivery.

Unfortunately, our crowdsourcing platform did not gain as much traffic as had been anticipated. Incentivising journalists (who are otherwise paid for writing reports for their media houses) to contribute to the media platform was a challenge. Other challenges included:- the low spread of ICTs, including poor networks in districts such as Pader and Amuru, and the fact that PRDP health interventions that were the primary target of the crowdsoucing platform were based outside of the urban/ semi-urban areas where journalists are based. This meant that journalists often lacked means to know what was happening at the facilities and could therefore not report on them. The limited level of connectivity and low levels of awareness of ICT use among the general population meant we could not rely on ordinary citizens for the reporting.

Additionally, the NUMEC website, whose users (the NUMEC members) were meant to drive the reporting, was off for several months hence making it hard to link the crowdsourcing platform to this website. This could have helped with both the mapping and the outreach for the platform.

Another challenge was that we were not able to carry out aggregation of reports/ repackaging of information to make it more usable to the media; neither did we proactively elevate the concerns received via the platform to duty bearers. Furthermore, the project experienced funds shortages that encumbered information collection as well as outreach and awareness-raising efforts.

Nonetheless, in order to fully utilise the platform, we begun mapping health service delivery reports received from Transparency International Uganda (TIU) via their toll free call centre onto our crowd sourcing platform. TIU is one of CIPESA’s partners under the ICT4Democracy in East Africa Network. While CIPESA benefitted from the reports received by TIU’s call centre, in turn TIU’s reports received wider outreach through our platforms.The network is premised on the recognition that Information and Communication Technology (ICT) enhances communication and the right to freedom of expression, as well as the right to seek, receive and impart information. In this respect, ICT has the potential to increase citizens’ participation in decision-making processes, thus strengthening democratisation. In Kenya, Tanzania and Uganda, where this initiative is active, seven member organizations are leveraging on ICT to hold leaders accountable to citizens, as well as to fight corruption, monitor service delivery, and contribute to building a democratic culture.

Towards the end of the reporting period, NUMEC was working to re-vamp its website for effective reporting in the region. Although the new site is still under development, NUMEC continued to engage its membership and the wider community on governance related issues via their facebook page  as well as to mentor some of the journalists working in the region to embrace the use of ICTs, particularly social media.

CIPESA hopes that with more funding for their iParticipate project they will still be able to use the platform and improve work to make sure journalists use the site.